Sometimes people just annoy me to no end. I mean, I'm annoyed by some people most days, but then there are times when more and more people seem to be annoying, and I just want to close my emotional doors and windows and withdraw, avoiding the entire human race.

Facebook seems to be the cause of this most of the time. Here are a couple of recent examples that happened to me there. One friend* suddenly started posting cold reactions to my posts or comments, as if she was a little perturbed, but didn't want to say so outright. I asked her about it via a private message, but I've yet to get a reply. Another friend* challenged something that I posted that was not at all presented as a challenge. The post went, "Here are some things that will explain why I don't celebrate 'Christmas,' if any of you are interested. They are in the form of booklets from the United Church of God, which happens to be a church I found online long ago. Its teachings are closest to what I believe as a Christian. These booklets can be read online, downloaded to be read offline, or you can request that they send you a printed copy."

So you can see that I didn't try to convert anyone with my post, nor did I imply that anyone who doesn't agree with my views is not very smart. But my friend accused me of doing just that sort of thing.

I should point out that I'm retired and seldom leave my house, so Facebook is the most exposure I have to people. I consider Facebook a way to keep active among human beings. It's not ideal, of course, but for someone like me, and for people who are forced to remain indoors (sick, handicapped, etc.) Facebook works as a way to keep in touch and informed, sort of.

*By "friend" I mean "Facebook friend" - someone I've never met except via the Internet, either on Facebook or Usenet, or both. Sometimes my Facebook friends are people I have actually met, but most are not.
at 5:31 AM No comments:

What They Won't Put On TV!

I was flipping through my on-screen guide to see if there was anything on that I wanted to watch and I came upon this listing. I don't know who the poor soul was that was executed with Debra, but he/she was obviously someone who wasn't as "important" as Debra. And what did Debra do to be executed? I thought she was doing well - then this!! (I didn't tune in.) 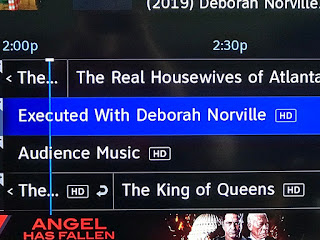 I haven't been here in quite some time. I'm entertaining ways to make this blog more active and more interesting, at least for me. The problem is that I have dogs that tell me when I've been sitting at my computer too long. I have a desktop computer because that's how I've evolved. I'd love to have a nice, expensive laptop, but I can't afford one right now. Also, I've never been real comfortable using a laptop - dragging it around here and there. But what I have done is bought a large iPad and a Bluetooth keyboard, which is nearly the same thing, only cheaper.

So I'll be back. Sooner than later, I hope. Here's what you need to know: I don't like our current holder of the office of President of the US, so you'll see some anti-him stuff; I love all animals, even the ones who've wronged me (I'll tell you about the raccoons later.), so you'll see some animal-rights stuff. I'm a sort of grammar nazi, so if you see any mistakes in my blog, they're just typos and I'll most likely come back in a little while and correct them. Feel free to point them out in the comments; I think Americans, as a group, are getting dumber. Not enough emphasis on what we're supposed to be learning in school; I'll share memes that I think are funny or sadly true; I'm a liberal, raised mostly on the left coast.

I don't care too much about your opinion. This is my blog. If you want to share your opinion, get your own blog.

I live in the middle of Texas where it's warm much of the time and hot most of the time. Occasionally, like today, it gets cold, but I'm sure people up north would laugh at what we, here, think of as "cold." Feel free to move to warmer climes if it bothers you.

I hope you'll enjoy whatever I post. If you don't, that's okay, too. I'm doing this for me, not for you.

I was a little bored a few days ago so I made this video.