Dexter has finally gone to the vet to be neutered and vaccinated. I couldn't really afford it and still can't, but he came home with a swollen eye (lid), so I figured I'd better take him to be seen. I made a deal with the vet to get Dexter neutered and vaccinated, and then to put him up for adoption. Hopefully someone will want him. He's a sweet cat, solid white, and not quite a year old. Now I need to see if the vet will do the same thing for Mister Eko. He's a solid black cat that has made my home his. 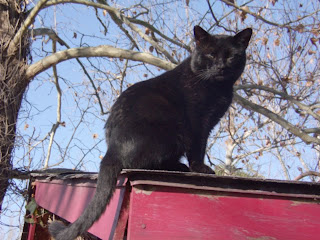 Mom's getting cold feet about moving to Oregon, and I can't really say I blame her. The area where she lives now has the best climate in the world, imho, and in hers. So when she hears that it's raining yet again in Oregon, she starts to rethink her decision to move. I think we will end up moving, but I also think there will be some hemming and hawing before we do.

I have been on the internet looking at homes that are for sale in the area she's interested in. There are a lot of really nice ones up there. I will put my favorites on a list for mom to look at when she's up there next month.

I want to be careful about how I do this. I want to buy a house with mom, although she will have more to invest in it than I will. What I don't want is angry brothers who think I'm trying to get something for nothing, among other things. The fact is that mom's getting older now, and she needs someone close by to look out for her. Since I'm single, I'm the logical choice. Also, I've been away from "home" for so long that I'd really like to spend some time with my mom before it's too late. If I do end up living with mom, I don't want to find myself out in the street looking for a home when she's gone. So I want to do this so that I end up with whatever house we buy without cheating my brothers out of what is rightfully going to be theirs.

I went to see the eye doctor yesterday. I need new glasses, but that's all. Nothing serious going on. I do have some annoying floaters, and the doctor says I have "loose vitreous," but there's nothing we can do about it. So for now I will have to live with seeing things out of the corners of my eyes that might be bugs, or might not.

I really need to mow the front yard. And the back yard, too, for that matter.
at 2:01 PM No comments:

I may be moving to Oregon soon. Mom, who lives in California, has finally decided that she's tired of living alone and wants to move to Oregon, where my older brother lives. I told her that I'd like to buy a house with her and live with her. She said that would be okay. So, if she doesn't change her mind, I'll probably be moving to Oregon. I'm allowed to take the dogs, and maybe a couple of the cats. This is a difficult thing for me. I don't believe in disposable pets, and I made a commitment to every pet I've ever had. So I have to decide if I'm willing to give up a couple of my cats. I honestly don't believe any of my pets would be treated as well anywhere else except here with me. That's what makes it so hard for me to find them another home.

I'm also worried that mom will go up to Oregon and find a house that I don't like and go ahead and buy it. You see, what will inevitably happen is that mom will pass (hopefully not any time soon) and the house will then be mine. I don't want to be stuck with a house I had no say in buying. So I'm putting my two cents in ahead of time. I've spoken with my brother about my concerns, to let him know I'd like a house that's about the size I have now (1,700 square feet), with a nice back yard big enough for the dogs to run around. And I've even seen a house online that I really like, and I've contacted the real estate agent selling the house. So hopefully, I'll have some say in the house I'm going to live in.

As for my house in Texas, I'll sell it if I can. If not, I'm prepared to walk away from it and let the bank foreclose. My credit is already in the toilet. I'd also consider selling it for the mortgage pay off amount to any Realtor who is interested in buying it, fixing it up, and reselling it.

I won't miss Texas, except that there is no state income tax. Oh, and the ruby throat hummingbirds that spend the summers here. Oregon is cooler than Texas, for sure, and the Texas heat is incredibly uncomfortable, to say the least. And I think Oregon gets the Rufous hummingbirds in the summer, as well as Anna's hummingbirds year round.

By the way, Mom has not made the announcement that she's moving to Oregon, so this information is close hold, until mom says something. Keep it a secret for now! Thanks.

Of course, I'll keep the two of you who read this blog posted on my progress! (More will read if I put the word "pussy" in the title or labels. Perverts.)
at 7:32 AM No comments:

I watched Lost for six years. I grew fond of the actors, as most of us do when we love a show. In this day and age some actors are on Twitter or Facebook, or they have a blog. This makes us feel even closer to our favorites. I know that Jorge Garcia and I aren't friends. I'm not that dumb. But I've been reading his blog since he started it, and I listen to his podcasts during this last season of Lost, so I am as close to him as he allows his fans to be. I've also grown to adore his little dog Nunu. She's been featured on his blog, and she can be heard barking in the background of his podcasts. She even showed up in an episode of Lost this season. That's why it broke my heart to hear that Nunu had been struck by a car and killed on her last day in Hawaii. Having had pets that passed away, I know what Jorge and his girlfriend, Beth, are going through. I wouldn't wish the feeling on my worst enemy. Rest In Pease little Nunu. You were loved more than you'll ever know.

I haven't been feeling very good lately. Not physically, but overall. It's hot in central Texas - hotter than it should be this time of year. And my A/C isn't working. I suspect that has a lot to do with it. I've been sweating more this past week than I did all winter. I think I already said that I'm thinking about moving to a colder climate

I'm also thinking of canceling my television service. But having grown up with TV in my life, I don't know if I can live without it. Well, of course I can live without it, but I don't know if I want to. It's not like I have a lot going on in my life that could replace watching television. I'd have to come up with something. A hobby, or friends, or something. I could read. I do that now, but not enough. I have several books on my bookshelf that I haven't read yet, so those would get me started. I might even be bored enough without TV that I'd clean my house. Regularly. But I'd have to get the A/C fixed, first. Excessive sweating would keep me from moving around too much.

I can still remember the TV line up when I was a kid living in California. Channel 2 was independent. Channel 4 was NBC, 5 was CBS, 7 and 11 were ABC, with 11 having some independent programs, as well. Channel 9 was PBS. That's all the channels we had back then - in the olden days - before cable. I think all those channels are still the same, actually. But they've been joined by several others, of course. Back then when someone said, "There's nothing on," they really meant it!

You don't really have to miss "television" if you cancel your service. I think just about anything is available on the Internet. I wouldn't want to sit at my desk watching TV shows, though, so I'd have to figure something else out. Some way to beam the computer display to a television set. (Do we still say "television set"?) And today, when I called to cancel my TiVo, they told me about something they offer that's an alternative to cable or satellite. I don't think it has an official name, but it has to do with buying a box you can use to order programs. Not an upgrade. I can't afford their upgrade. This is something else. I'm going to check it out on their website and see what it says.

Okay, that's all for now. Time to go shower and go grocery shopping. I decided to wait until after dark so the temperature would go down a few degrees.
at 7:53 PM No comments: