Regardless of how you feel about Sarah Palin, check this out...

The History of the Internet

I just found this and decided to share. It's pretty interesting, even if you're not an internet nerd. "The History of the Internet, In a Nutshell"
at 11:39 PM 1 comment:

I just watched, for the first time, Evan Almighty. I had heard that it was bad, but I didn't think so. I didn't especially like the ending, but I let out a few laughs during the rest of the movie. Wanda Sykes had a role, and she's always funny. So those of you who haven't seen it because you think it's going to be bad should go ahead and give it a chance.
at 8:12 AM No comments:

"Every gun that is made, every warship launched, every rocket fired, signifies in the final sense a theft from those who hunger and are not fed, those who are cold and are not clothed." -Dwight D. Eisenhower

"Every war when it comes, or before it comes, is represented not as a war but as an act of self-defense against a homicidal maniac." - George Orwell
at 7:55 AM No comments:

Email ThisBlogThis!Share to TwitterShare to FacebookShare to Pinterest
Labels: quotes

I'm frankly amazed that I haven't heard about this before now. Go here to read about it.
at 6:06 AM No comments:

I suppose it's okay to laugh, since she's the one writing the book and doing the stage performance about her life. Sometimes though, I wonder. I wonder if she wants us to laugh, and if so, how much? I wonder how many people won't even think about it?
at 8:29 PM No comments:

Not Mickey or Minnie 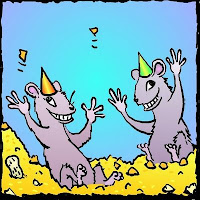 I have just discovered that mice have been partying in my furniture. I have a dresser that I painted and use for storage in my dining room. Today I was looking for something and found lots and lots of mouse droppings in one of the drawers. Yuck. I knew I had mice in the house. The cats have been helping to keep the numbers down. But I had no idea there was a party going on in the dresser. Fortunately, the stuff in that drawer wasn't too important, so everything that got peed on went in the garbage. And I pulled up the liner and threw that away. Then I sprayed the whole drawer with Clorox Clean-up and wiped it out. While I've already checked a couple of the other drawers, I'm procrastinating looking in others. But I will. So far the drawers I have checked had some mouse droppings, but nothing like the party drawer. The drawers I haven't yet checked are the two large drawers in the bottom of the dresser. I expect at least one of them to possibly be another party drawer. We'll see.
at 5:50 PM 1 comment:

I honestly believe that as I get older, I'm getting dumber. I was having trouble getting one of my websites to come up. Turns out the index.html file was missing. I had to have someone else notice that for me. (Thanks E.) I used to be sharper.

I have caught myself believing television commercials. Fortunately only for a few seconds. An ad will come on TV touting something as "the best" and, for a few seconds, I'll actually believe it is the best.

A few days ago I was on the phone troubleshooting my DSL connection with a tech support guy. He asked me if I had another phone cable I could plug in between the modem and the wall to test the line. I said no. He suggested maybe I could use one that was attached to a phone in the house. So what did I do? I disconnected the phone line I was using! What the hell was I thinking? I never would have done something that dumb a few years ago. Thank goodness the guy called me right back and I'd plugged the phone back it. It only took me a second to realize what I had done, but still, I'd done it.

There are other examples, but my memory is going, too, so I don't remember them. But I do recall that there are many instances when I had to mentally slap myself.

By the way, I have noticed that I'm a little sharper when I take ginko biloba. I'd better start taking more!
at 5:52 PM 1 comment:

I don't have anything current to blog about, so I thought I'd mention that I once met COL Roger Donlon, who won the first Medal of Honor awarded in Vietnam.

I was at the Hog's Breath Inn in Carmel, California, when he was there with some Special Forces guys having some sort of party. I'm pretty sure this was in 1981.

If you want to read about COL Donlon, click here, then take your pick.
.
at 7:50 PM No comments:

Warning printed on wrapper: Do Not Eat Raw Cookie Dough.
at 12:05 AM No comments:

This movie is unique because, in spite of an all-star cast, it was not released to theaters. It came out on DVD last Tuesday.

It stars Christopher Walken, Morgan Freeman and William H. Macy as museum security guards who each become enamored with a piece of artwork in the museum. (A separate piece for each man.) When they find out the whole exhibit will be crated up and shipped off to Denmark, they decide to steal the pieces they adore. I'm a fan of all three actors, and enjoyed their acting in this movie as I usually do. William H. Macy was particularly entertaining as a gung ho yet slightly offbeat (and occasionally nude) ex-marine.

This movie is entertaining and sometimes funny, but I think I understand why it wasn't released in theaters. One problem is that there are some short animation scenes while they're planning the heist that could have been done much better. Those scenes actually started to give me a headache. Fortunately they didn't last very long. And the ending leaves a lot to be desired. They had the right idea, but it was poorly done.

If you want more details, click the link to see the IMDB web page. I'm not much of a reviewer when it comes to details.

I wouldn't recommend purchasing this movie. It's not worth the price. Worth the price of rental but only after you've seen all the movies you really want to see!

On Netflix I gave it three out of five stars. Three stars is the lowest score you can give for liking a movie. Two stars is "didn't like it," so I couldn't give two stars. If I could divide three stars into a three minus (liked it a little) and three plus (liked it a lot), I'd give the three minus. It wasn't as good as most other movies I've rated with three stars.
at 12:40 AM No comments: