There have been a lot of Watergate specials on TV lately. That's because it's been 50 years since the break-in. A 50-year anniversary will always mean a lot of TV specials. Since I didn't pay much attention to it when it happened, and since history interests me more than it did in school when I failed and had to repeat US History in summer school, I have been watching some of these documentaries. What has surprised me is not what these men did, but how civilly it was handled after it happened.

In case you don't know, in 1972, several men broke into the headquarters of the Democratic National Committee at the Watergate hotel in Washington D.C. (I don't think anyone has definitively said what they were looking for, but it must have been information on the Democrat's strategy in the upcoming presidential election. It never really mattered what they were there for.) A lot of stuff happened and, eventually, the Republican President, Richard Nixon, was forced to resign due to it having been proven that he knew all about it and was trying to cover it up. If you want more details, click on this link to the Watergate Scandal page on Wikipedia.

As I watched the shows about Watergate, it amazed me at how civil everyone was to each other. Today politicians rarely get along if they're not in the same party, and often even politicians in the same party don't get along. There's a lot of ugliness and hostility in politics today. The idea of coming together "across the aisle" to compromise on something is extremely rare. Many politicians won't support anything that wasn't proposed by someone in their own party. Doesn't matter what it's about.

I'm a Democrat-leaning Independent. A liberal. So you're going to cite that whenever I say something negative about Republicans.  So be it. But so many Republicans are working so hard to block anything the Democrats propose. Health care? Blocked. Recession relief? Blocked. Teaching historical truth? Blocked. Voting rights? Blocked. Affordable prescriptions, especially insulin? Blocked. I could go on, but you can find information about this elsewhere. (Here's an informative article about it.)

I wonder what has happened over the years to make so many people so defiant and so angry. It amazes me. It scares me.

I live in a "red state" and most of the people who live in my little town are Trump supporters. Well, they were. There's no telling anymore. But still, a lot of these people would continue to support Trump even if he was raping their grandma. I firmly believe that. When a new neighbor moved in and hung a Trump flag on his front porch I was visibly shaken.

Scenario: Someone's raping grandma.  Get the gun and then run to grandma to save and protect her. Aim the gun at the rapist. Wait. What? Oh, it's Trump? Sorry, grandma.

No, this would never happen. Grandma's too old and wrinkly for Trump. But maybe your sister or your daughter. Hmmm? He did say he likes to grab them by the pussy.

So anyway, back to Watergate. As I watched the documentaries, I watched all these Democrat and Republican politicians being nice to each other. Even the Nixon-loving Republicans thought he had gone too far and wanted to impeach him. Amazing! These documentaries usually end with Nixon climbing into Marine One to leave the White House for the last time.

As I watch the end of the documentary, tears came to my eyes. It's was so fantastically awesome how these (mostly) men came together to do the right thing. What happened between then and now? Why are we so hateful and hurtful when it comes to political opinions. We used to be able to discuss our differences. We can't do that anymore and that's just a sad commentary on our country.

I don't know where it's going.

I was having serious money problems so I changed some things. I canceled my cable TV which saves me slightly over $100 per month. I completely quit making payments on all but one of my credit cards, which saves me several hundred dollars per month. Even with these debts "gone" each month, I'm still in the red and bouncing checks (at $20 per bounced check, btw).

Every month I try to cut back, but every month I'm in the red, and I just don't understand it. I'm only paying the things I have to pay, but I'm still fucked. I just don't get it.

My PayPal is sme617@gmail.com or scan this: 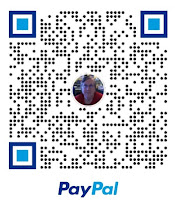