Life Still Sucks, But In An Interesting Way

The bank sent me a letter. They do that often because, in their opinion, I use my overdraft protection far too much. They've been sending me letters telling me there are better ways to "borrow" money. Yeah. I know that. But most people who lend you money generally want you to have a good credit score. They want some assurance they'll actually get their money back. My credit score is not good, so these people tell me "no" and then have a good laugh when I leave their offices.

This letter was different. It said, basically, "you're cut off." They're taking my overdraft protection away. I'm not angry or surprised. Frankly, I wondered why they hadn't done it sooner, if it had always been an option.

Ultimately this will be a good thing for me. I mean, it's money I have to "pay back" every month, so there's no outstanding balance like with credit. And each time I "dip into" the overdraft protection I am charged a fee, which only adds to my monthly deficit. Again, this is money they take from me and which is paid back each month. So technically, I can get along without overdraft protection, and now I'm going to have to try even harder to do so. The good news is it will be cheaper for me because there will be no more overdraft fees. The bad news is that there will be "insufficient fund" fees if/when a check bounces.

I'm going to go in to see the people in this very same bank about getting one of the loans they have urged me to get. The easiest one should be an account based on the equity in my home, and that will mean a very low interest rate. I still expect them to say "no" and laugh at me, though, because my credit score is so low.

I'm also planning a yard sale. I have a bunch of stuff that's worth money, and a lot of it I don't even use.

The cat situation in my home is becoming unbearably stressful for me. A few nights ago I broke up a cat fight between two of my "pet" cats. I did so without thinking and without gloves. That resulted in a couple of fairly deep and serious bites to my right hand. I know that cat bites are notoriously bad due to the sharpness of their teeth combined with the bacteria in their mouths. For this reason it's always a good idea to go straight to the hospital whenever you suffer a cat bite. I didn't. Several of my Facebook friends are angry about that. My hand swelled, and is still swollen, but feels like the swelling is going down. And I thoroughly cleaned the bites with hydrogen peroxide and have been keeping them clean and, until a few hours ago, bandaged. The bites are drying up and scabbing, which means they're not infected. As long as it doesn't get any worse, I'm not going to see the doctor. I'm sure they'll want to put me on strong antibiotics, which I don't mind, but they'd probably be of the IV type, and that would require either a stay in the hospital or a visit every eight hours for the duration of the treatment. No thanks.

Besides this fight & bite incident, I had a minor meltdown a couple of weeks ago. I have at least three - possibly more - cats that spray urine to mark territory. A couple of them want to climb up on counters and table tops and spray things you definitely do not want sprayed. I mean, no one wants anything to be urine sprayed by cats, but there are things that are not so bad, like walls, which can be easily cleaned, and there are things that are very bad, like the clean dishes in the dish rack, and the toaster oven, and the coffee maker, and anything that isn't easily cleanable. And this was what was happening in my house. I have gone so far as to tape protective pads (puppy potty training pads) to many items in order to protect them: my computer, monitor, and peripherals; countertop appliances; televisions (when not in use); and more. This is drastic and somewhat disgusting, but it has saved me some serious stress. But when I had my meltdown it was because someone had sprayed the coffee maker before I could get the protective pad in place. It was nearly the straw that broke the camel's back, and I was about ready to get out my gun and start "euthanizing" all the cats in my home.

"Get rid of the cats," you suggest. Yeah. Easier said than done, unless you just don't care about cats. And if that were true, I wouldn't be in this situation to begin with. Do you have any idea how difficult it is to find a home for an adult cat - even a neutered and vaccinated adult cat? It's very difficult. And I didn't take in these animals just to turn them over to someone who will euthanize them. I have put an ad up on a local Facebook page for pet adoptions, and I'm willing to give up most of the cats that are now in my care. But like I said, there are not many people who want adult cats.

My sweet cousin sent me a book called Cat vs. Cat, which I have not yet read but which I intend to very soon. She hopes it will help me with the problems I'm having. I hope so, too, but I confess that I'm not very optimistic. I've researched some of the problems I'm having and have not yet found the answers. But like I said, I have not yet read the book. I suppose the easiest "fix" would be to find a way to keep the cats off the counters and tabletops. Anyone know how to do that? Please don't tell me to put tape on the countertops unless you can tell me a way to keep it on the countertops. I want to annoy the cats, but I don't want the tape to come off the counter and stick to them.

My car has been causing its occasional routine and not-very-expensive-thank-God problems. First I had a blowout while driving to see one of my favorite authors who was appearing in a bookstore about a hundred miles from my home. While changing my tire I discovered that the spare, which was 16-years old (as old as the car), had shredded in my trunk. So I had to call a tow truck to take me and my car home and then I had to buy a new tire and a new spare. My spare is one of those little "doughnut" spares, which is smaller than a regular tire and requires you to drive no faster than about 50 miles per hour for as long as you're driving on it. It also costs more than a regular tire.

I missed seeing the author I'd wanted to see, but I did managed to get a autographed copy of the book he was trumpeting by arranging it with the wonderful people at the bookstore.


About two weeks after the tire incident my relatively new battery died and I had to replace it. I say "relatively new" because it was only two years old, and other batteries I'd had lasted at least five years. I didn't get a free replacement from the store where I bought it, but I got a discount. Same type of battery, though, which means it'll probably last just another two years. Texas heat takes a real toll on car batteries. And I don't have any shade over my driveway, so my car is parked in direct sunlight most of the time.

I had to have another beloved dog put down. He was so sick, and having such a hard time getting around. Roscoe came into my life as an adult stray. I'm not exactly sure when I took him in, but I know it was at least 2004. So he was at least ten years old. He was a basset mix. He'd been a stray in my neighborhood for about two weeks when I put him in my backyard and called animal control to come and get him. Needless to say, they never did. He became a member of my family and was a wonderful addition. He got along with all the dogs and cats, and was housebroken. It took him a short time to get used to using the doggy door because of the clicking sound it made when he went through. For some reason he was spooked by loud noises. But he soon got to be a pro! He went to be with Rosie at the Rainbow Bridge on February 26th - just one week after the anniversary of Rosie's passing. 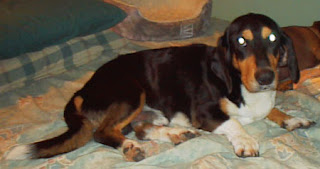 My butt's getting a little sore because I've been sitting here for awhile, so I'm going to quit for now.