I'll let you in on a little secret.

I got another dog. 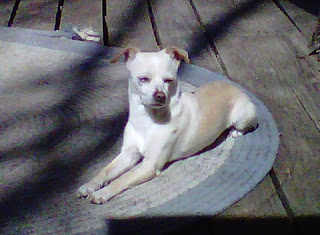 Buddy is a deer-leg chihuahua, born on May 18, 2004, which makes him almost seven years old. 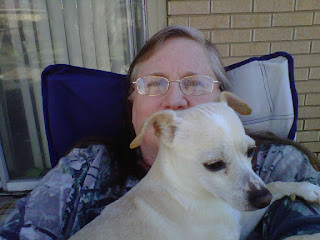 Buddy belonged to the grandmother of a friend of mine. When grandma had to go into a home, Buddy got left behind. After awhile my friend decided that, with a new baby in the house, she didn't really have the time to commit to Buddy. She decided to find him a home.

I'd been thinking for some time about getting a chihuahua. I used to have one - Corky - that was at least ten years old when I got her. She passed away a few years ago and I really miss her. That's why I thought about getting another chihuahua. But not just any chihuahua. I wanted to adopt a senior chihuahua. And voilà, Buddy came along!

He got along with the dogs right away, and they with him. The cats took a little longer. He had to learn which one was friendly, which one was unfriendly, and which ones were somewhere in between. He's got them mostly figured out. Sometimes if one of them is in a bad mood and Buddy gets too close, the cat will smack him. Sometimes Buddy will bark and chase one of the cats, for which he gets a stern warning not to do that!

Buddy came completely housebroken, but he doesn't know how to use the doggy door. We're working on that.
at 4:46 AM