Now I Know How A Beer Keg Feels

"Previously on the blog:" For those of you who haven't been paying attention, or with short memories: Recently I had an ultrasound exam that showed fluid in my abdomen (Ascites) and that my liver was shrunken and had spots. I was scheduled for an appointment with a stomach/liver specialist.

I skipped my Nov. 17 appointment. Dumb thing to do, I know, but that's typical for me. Not doing dumb things, necessarily, but missing appointments. I called the clinic and rescheduled. I was lucky enough to get an appointment the next day, because someone had called to cancel.

My appointment was with a "physician's assistant," rather than with a doctor, but I'll call him "Doc." He is a retired Army Major who was deployed with troops in the Gulf - Iraq and Afganistan.

Doc was very intrigued by my case. He said after reviewing my file and talking with me that I was just too healthy to be having the symptoms I'm having, i.e. ascites and liver issues. He said that the vast majority of people with my symptoms were very sick. He said he could usually recognize them, that they looked like they were "at death's door." We talked for awhile. He decided that I needed to have some blood drawn for testing, and I did, later. They took several vials of blood. Doc said he'd review the results of the blood tests and contact me if there was anything important to deal with - anything serious.

He had a look at my huge belly and we talked about draining the fluids in my abdomen. I'd seen on the Internet that that was possible. He agreed that it probably should be done, so he called a friend of his - also a retired Army medical person - and asked if I could get in the same day (yesterday, Nov. 22). He told "Doc 2" that I had "massive acites." Doc 2 said he'd set me up for a time and call back. Instead of calling, he showed up in Doc's office while I was still there and had a look for himself. He told me that he could "drain me" at 2:00 that afternoon. I suspected, and he later confirmed, that he had shown up to ensure that I really needed to be "drained" that day, and that Doc wasn't overreacting. (He wasn't.)

Doc also said that he was going to schedule me for a CT scan. He said this would help us to see what is going on with my liver. The CT scan should be soon, because Doc said he was doing whatever it is that makes it a higher than normal priority. He'll notify me when he finds out the date and time for that CT scan. I haven't heard yet.

So I finished with Doc and went to have all that blood drawn. I also had to pick up a prescription for medication that is supposed to keep the fluid that would be drained from being replaced with yet more fluid.

At 2:00 I went to have my fluid drained. (They also refer to this as "tapping," like tapping a keg of beer!)  I didn't really know what to expect as far as pain, but I knew that, even if there was some pain involved, I was ready to have this done. Doc 2 was real nice and explained everything, as well as answering questions I had about the procedure about acites in general.

There was really no pain. First he gave me a shot to numb the area where the needle (or tube, I'm not really sure what it was) would be inserted. I barely felt that shot. I also barely felt the tube/needle being inserted, except for while he was trying to "find the fluid." What I did feel was uncomfortable but not painful at all. 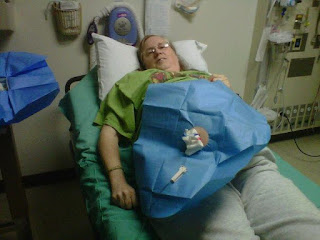 Doc 2 explained that he would be draining four liters of fluid (about one gallon). There was more fluid than that in my abdomen, but he said that draining any more would significantly increase the risks involved. He said that we might want to drain some fluid again at some time, but we'd wait and see.

I felt a hell of a lot better even before I was finished. A lot of pressure was relieved from my lungs and other organs. I hadn't realized what affect the fluid was having on my breathing until some of it had been drained. To explain: I had to walk from the far reaches of the over crowded parking lot into the hospital and, of course, from the hospital back to my car after the appointments. When walking into the hospital, I was very short of breath by the time I got to the clinic. After having the fluid drained, I was not out of breath at all walking back to my car. Also, I think I slept better last night than I have for some time.

Doc 2 put a bandaid on my little puncture and warned me what to watch out for. He said that I might continue to drain a bit. He said it wasn't a concern and told me what to do about it. He also said I might begin to bleed. This would be a concern, and that I should get to the emergency room if that were to happen. Neither one has happened.

So that's where I stand today. Overall, Doc says that I'm quite healthy and that, right now, I shouldn't worry about anything. I'm taking the meds to prevent the fluid buildup, waiting to see if that will work and not having any side effects. I'm also waiting for notice of the CT scan appointment.

To all of you who care about what's going on with me, thank you. It's nice to know that you're out there. I'll keep you posted.
at 4:57 PM

Hang in there, and I hope you get better soon.

I'm glad that you feel a little better, keep us posted.

I will keep my fingers crossed and you in my thoughts and prayers for negative result for CTScan of your liver. I am relieved - as you are, that both Doc 1 and Doc 2 have such a positve outlook about your health. Take care of yourself ...don't miss any appointments and remember the flight attendants' admonition 'put on your mask first.' Hooah!

You seem to be in very good hands. Good to know that your breathing has improved. Hope all goes well !.