I love Brach's Jelly Nougats. That's what you see in the picture above. Normally, and for years, you'd have to buy these "loose." In other words, you had to find a store with a candy bin, then you had to scoop some out of the bin into a bag. You'd pay for them by weight. It's no secret that the best ones have the most little "jelly" bits, because that gives them more flavor.

To my surprise, Brach's decided to make "Jelly Bean Nougats" and put them in a 13 oz. bag to sell for easter. Yay! I bought a few bags as easter approached. When easter passed and all the candy went down to 75% off, I bought the remaining bags. That's how much I love Brach's Jelly Nougats.

I have to say, though, that I was a bit disappointed. It seems there were some pieces that were more nougat than jelly. Worse, there were some that were ALL nougat and NO jelly. Well, sure, I ate them. I shared the plainest ones with my dog, Roscoe, who loves to eat candy.

Of course, the photo above, which I, um, borrowed from the Brach's web site, shows the best examples of the jelly nougat. Lots of jelly bits. Now let me show you my photo: 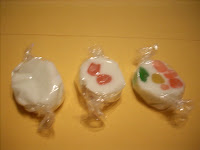 I think the Brach's company should be more careful to place only the best "Jelly Bean Nougats" into their bags. Anything less is just unprofessional.
at 12:27 AM

Love your writing style. I have very fond memories of the candy and you said all you need to know about it.