Profound? How about just smart?

I admit that I wasn't very smart when I was in high school. My grades were barely good enough to graduate, and I was clueless about the world around me. When I think of who Sue was back then (1966-1970), I don't think I was as smart as this "Reaction" makes me seem. I was 16 years old when I wrote this.

We were well into the hippie movement of the late sixties when someone wrote to the newspaper saying that hippies were dirty, lazy, and stupid. I think the main point was that hippies were all alike: that even though they wanted to be individuals, there was nothing individual about them. Their bit was called an "Opinion." Mine was the "Reaction."

I kept this because I was proud of it. Wouldn't you be? 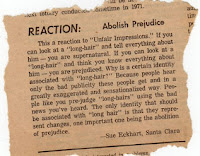 (They spelled my name wrong.)

Funny story. I got up and looked at the newspaper that day. (Must have been a weekend because mom was home.) When I saw my "Reaction" published, I said out loud something like, "They published my Reaction." My mom asked what I was talking about and I showed her. She remarked that she'd seen it and not paid any attention to who wrote it. She'd thought the writer wasn't very bright! I guess she was too old at that time to appreciate the hippies!! ;-)
at 9:23 PM