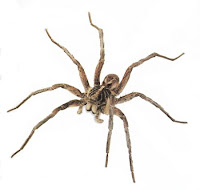 I just carried a large wolf spider outside. It was in my bathroom. I scooped it up in a paper cup and carried it outside. The first time I tried, it jumped out of the cup and scared the poo out of me. So I had to scoop it back into the cup and take it outside. I like spiders. Just don't like the big ones in my house! The wolf spider (like the one above) was about three inches from the tip of the front leg to the tip of the back leg. I've seen them outside several times. I even saw a female once that was carrying bunches of babies on her back. (I saw another female when I worked at Walgreens. It was inside the store. It, also, was covered with babies. I scooped her up in a plastic bag and took her outside.)

Mountain Dew has come out with a new flavor: Ultra Violet. It's okay. It's sweeter than regular Mountain Dew, and has a mixed berry taste. What's unusual, and the reason I mention it at all, is that it has come out in a diet version. This is unusual. In all the times I've seen new, temporary Mt. Dew flavors, I've never seen a diet version. I started drinking Mt. Dew when I was working nights and needed the extra caffeine. Now I drink it because I like it (and for the caffeine, since I'm tired all the time). I buy it in cans so I can recycle them.

Now that I'm unemployed I'm getting into that backward sleep routine that I fall into whenever I don't have to work. I sleep late and stay up late, sleep later then stay up later. I don't mind the schedule, actually, but there are things I still need to do in the daytime, like make some phone calls. Everything else I do I do on the computer, which is a 24/7 machine. (Machine?)

Nurse Jackie is a new show on Showtime. The season finale will be shown next week. If you missed the season, you missed an excellent show. I know that nurses were up in arms about the premise of the show - an ER nurse that regularly abused Rx drugs. I guess nurses think we, the viewers, are idiots. If I see a nurse doing drugs on TV, that means they all do drugs, right? Everything on TV is real, isn't it? Nurse Jackie is a very good show about ONE nurse, and the drug abuse isn't the only problem she has. Why didn't the nurses complain about the other stuff? Nurse Jackie stars Edie Falco of "Sopranos" fame. (I've never seen a single episode of Sopranos.)

I love my TiVo. I can completely ignore my TV and let TiVo record whatever I want it to record. Then, when I feel like watching, I can. Of course, there are a couple of shows I have to watch right away, as they are broadcast. One is Lost, which will be back for its final season in January. The other is Dexter, which starts its new season in September.