I'm still here. I haven't posted because nothing interesting has been happening.

For some reason I've started dreaming about airline pilots. No one in particular (and at least one of you out there will understand why I'm saying that!). I have frequently, in the past, dreamed about flying in a plane. Usually I'm on my way to or from Germany. Since I've flown that flight many, many times, it is no wonder that's the flight I'm on. But now the pilots are present. Could be because one of the members of the Umbrella Hat Society is a pilot. He's also a friend on my Facebook page. I did dream about him once. He didn't look like himself in my dream, but I knew it was him. But I've had other pilot dreams where the pilot was not known to me. This is neither good nor bad. Just a curiosity.

I think the hummingbirds are finally gone. I haven't seen one for a couple of days. This is the latest I've ever seen them hang around. Maybe they always did but I just didn't see them. Or maybe it's .

The weather is finally getting cooler, but due to vast amounts of rain, the humidity is still high. I guess it will be until all that moisture evaporates. That won't be for awhile, because we have more rain in the forecast, including the light sprinkle we got today (so far). As the heat and humidity disappear, so does that excuse for not getting any housework or outdoor work done. 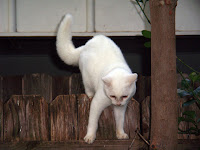 I have a little white cat that has strayed into my life. I have called animal control and one of the two vets in town to see if anyone has reported him missing. (I plan to call the other.) He was wearing a flea collar, so I know he belongs to someone. I say "was" because I cut it off. Collars that don't break away are a very bad idea for outdoor cats. They can get caught up on something and strangle the cat. Also, flea collars are not the best way to deal with fleas. Or to prevent fleas. Read the precautions on any flea collar box. "Don't touch. If you do touch, wash your hands thoroughly." So why put that nasty thing on your sweet little cat? I have some cat/kitten-strength Frontline that I will apply today. 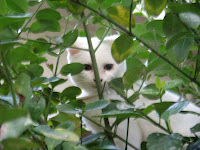 I think the thunder and lightning we've had, combined with this cat's young age, may have contributed to the cat not being where it's supposed to be. We've probably all heard about animals that bolt during thunder storms. This cat may be one of those.

Would it be too chiché to call him "Snowball"?

I've brought him inside and he's sleeping on the table next to my computer desk right now!

I have a new website, and I hope you all (the two or three who visit) will join in. It's just for fun - an experiment of sorts. It's "Send Me A Dime." You'll find a full explanation on the site. Please forward the URL to all of your e-correspondents. (They'll only be angry for a minute.)

Chris Rock has done a documentary. That's right, a documentary. It's about black women and their hair. You can find the official website here. Sounds like it's going to be a very funny movie. (I'm not getting paid to promote it, btw!)

Yay Kitty! :) Nice Kitty! Are you going to try to find its 'owner' by hanging a sign or looking in the paper for a lost kitty ad? There may be some small child who is inconsolable....

Of course. I don't need another cat in my life! I love the furry creatures, but four is enough!