This weekend I spent some time sitting out back on the deck, reading. I don't do either of those things very much, but I have to say that I enjoyed doing both. It's been warm, of course, but I think the humidity must be down, because it was quite comfortable sitting out there. I think I'm going to go get one of those outdoor lounge chair things so I can sit out there and read more often. I keep telling myself I need to read more. I have several unread books on my shelf and no real excuse for not reading them.

The book I'm reading is one that one of my Facebook "friends" recommended. It's called The Force is Middling in this One: And Other Ruminations from the Outskirts of the Empire

, by Robert Kroese. It's quite entertaining, and very funny. It's actually a collection of blog posts, so it covers many topics. It's an easy read. I highly recommend it. If you're a Dave Barry fan I think you'll especially enjoy it.

There are two types of mosquito bites. First, there's the minimally annoying bite. It itches a little and lasts for about two days. Then there's the extremely itchy, wake-you-up-at-night, lasts-forever bite like the one I have on my wrist right now. I don't know what sort of mosquito bites like that, but I'm pretty sure that it first exposes the victim to some sort of chemical that causes her to be oblivious to the insect's presence. I know this because, if it didn't, I'm sure I would have seen and felt something that evil piercing my skin. I literally woke up last night itching like crazy, and couldn't go back to sleep until I started to feel the effects of some anti-itch cream I slathered on.

Mosquitoes are one big reason I don't go outside much. I'm one of those people they love to bite. If you're having an outdoor party,  you want to invite someone like me to keep the mosquitoes away from everyone else. Because they like me so much, I'm always spraying poison all over my arms and legs to keep them away. (Obviously, I occasionally miss a spot.) I can't help but wonder what this is doing to me - what sort of disfiguring, painful, slow-killing disease I might end up with. Yesterday I wondered if there is some sort of "personal insect net/tent" for sale that I could use when I go out to read. If not, there should be. Maybe I'll "invent" one. I imagined something shaped like an umbrella with insect netting that reaches the ground. It would have to be designed so that it could be used in either a sitting or a prone position.

On Facebook I've "liked" a group called "I wish mosquitoes sucked fat instead of blood." Can you imagine the sort of spa treatments (or would it be considered plastic surgery?) we'd be able to have if that were true? You'd be nearly naked and go into a room filled with hungry mosquitoes. You'd probably have your head covered, as well as any areas on your body that didn't need slimming. What would we do about the itching? Would we tolerate it to be thin? Would we be prescribed large doses of something that would numb our body (or brain) until the itching passed? How would we make sure the fat sucking was done evenly? What if it wasn't? We'd have to come up with some way to direct the fat-sucking mosquitoes to the "problem areas." Maybe, instead of a room full of mosquitoes, there would be little devices we'd wear, say, on our thighs, that would be full of mosquitoes. We'd strap it on and slide open a little panel that exposed the problem area to the mosquitoes. "Full treatment again, Ms. Smith?" "No, I think I'm just going to do the love handles today, Pierre."

I feel bad, sometimes, that I don't take the dogs outside more. They can go out whenever they want to because I have a doggie door, and they know how to use it. But they prefer to be inside. So while I was out on the deck reading, I was thinking that it was nice for the dogs to get out. Especially Rosie, who doesn't get enough exercise, and walking around, exploring the back yard was exercise. Not as much as she needs, but more than she gets now. So imagine how I felt when Rosie's eye started to look like it might be infected, and a resulting trip to the vet showed that it was a result of her getting something lodged into her eye as a result of our outside time. She actually has something in her eye. Not something you can wash out or remove with a cotton swab. Something actually stuck in her eyeball. And this something could cause some very serious trouble - including blindness and loss of her eye - if it doesn't get better. I'm treating her with two medications, both which go into her eye, and we're hoping that they, however they work, remove the thing from her eyeball. (I have to remind you, at this point, that there is a "contribute" button in the right margin!)

Here's a picture of what I see when I'm sitting out on the deck and I look up: 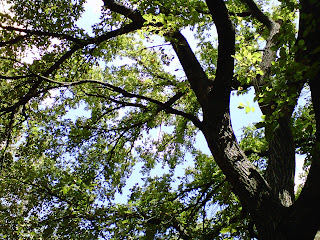 This tree is key in keeping the temperature down in my house in the summer. It's quite large and its branches cover most of the house. Strangers frequently stop by and ask if I want them to trim the branches for me. I usually respond, "Yes, if you'll do it for free." Then they leave. Same thing happens when someone wants to mow my front lawn.
I got a great deal on a new lawnmower. I was having problems with the old one in spite of having changed the air filter and the spark plug. I put some gas in it and it started right up. When that gas was used up it stopped, of course. I added more gas. But I guess the mower decided it had worked enough that day and refused to start again. I tried several more times (on different days) to get the thing to start again so I could actually mow my lawn (which I don't really mind doing myself), but with no success. So, like most decadent Americans, I decided to buy a new mower. I grabbed my Walmart credit card and off I went. I was going to buy the cheapest mower they had, which was $175. On the way into the store I noticed a lawnmower sitting all by itself with a sign that said $153. It looked very much like the $175 mower that I'd planned to buy. Of course I asked about it. The story was that someone had bought it and decided they didn't want it, so they brought it back. It looked like new. It worked fine. It was just "used," so it was discounted. The big surprise was that it wasn't the $175 mower I'd been wanting, but a more expensive model that I wouldn't have been able to afford ($275, if I recall correctly). I snatched that baby right up!!
This new mower is self-propelled, which is great, but makes me feel a little guilty because I'm not getting as much exercise as I did with a push mower. Oh well. We have to make some sacrifices. In case you're not familiar with how a self-propelled mower works, I'll tell you. There is a thin bar you have to squeeze in order to start the motor and make it run, just like push mowers. Then, to make the mower move forward, there's a handle you squeeze. The more you squeeze, the faster you go. Now, maybe it's because I'm getting older, but sometimes I forget, when the mower get going too fast, that all I need to do to slow it down is to release the handle. If you were to watch me mow the lawn, you'd know exactly when this happens, because for just a second I look a little awkward, walking very quickly behind the mower! I'm strongly hoping that continued use of this mower will eventually accustom me to the speed control. If not, I might put out a tip jar for when the neighbors are watching.
at 6:09 PM