Nine years ago today I woke up at just about the same time I did today. I didn't need to get up so early. Nine years ago I was scheduled for an evening shift at work, which meant I didn't have to be at work until 4:00 p.m. But Rosie, my dachshund, was restless for some reason, so I got up. It was 7:30 a.m. central time - 8:30 a.m. eastern time. I turned the TV on and began watching the Today show. It wasn't very long at all before someone announced that a plane had crashed into one of the twin towers at the World Trade Center. My first coherent thought was that it must have been an act of terrorism. I did, for a split second, entertain the possibility that it was a horrible accident, but for some reason I just didn't believe that. Soon enough my thought was confirmed - a second plane crashed into the second twin tower. I was in a position to watch this second attack live, since I'd been watching TV closely after the first plane crash. Then I heard the news that a third plane had crashed into the Pentagon, and that a fourth plane had gone down in Pennsylvania.

I was a mess for the rest of the day. I watched live as people - thousands of people - died. I watched the fire. I watched as both towers crashed to the ground.

Eventually I had to shower and go to work. But I couldn't get the images of the day out of my mind.

I know that a lot of people were affected by what happened that day. Many, unlike myself, actually knew someone, or knew someone who knew someone, who was killed that day. I can only conclude that the reason I was so personally affected was because of my military service. For 22 years I served my country, ready to put my life on the line to protect our people and our freedoms. In a few short hours on September 11, 2001, our country was attacked like never before. So many had been killed; innocents, service members, rescuers, heroes. The world would never be the same. 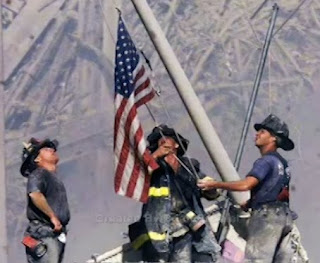