The Plight of Feral Cats

I wish people who have "intact" cats - cats that have not been neutered or spayed - could see what I see. I have a small colony of feral cats near my home. It's small because of the horrible things that happen to the cats - things I see on a regular basis. It's not unusual to find a dead cat near my house. I've found dead adults as well as dead kittens. The cause of death is usually a mystery because there's no way to really know, unless the cat has been hit by a car, which has happened, even though I live in a low-traffic area. It's usually a good guess, though, that the dead cats or kittens were killed somehow - probably by another cat. A neighbor recently witnessed a male cat trying to kill a litter of kittens. She shooed off the adult cat and rescued the kittens. Two were visibly injured. The third seemed okay. I'm sure other litters of kittens have been killed. But it was, thankfully, done where I couldn't see it.

Because I feel it's less humane to feed them than to ignore them, there's often several small bowls of cat food on my front porch. I see the same cats visit for food on a regular basis. Some show up more often than others. One took up residence on my porch and was a regular fixture. "CC," as I called him, was starting to let me touch him and pet him without freaking out too much. He was a couple of years old, and had survived an incident long ago that left him dragging his back end around, rather than walking. I was going to have him put down if I could catch him, but he somehow got better and was walking normally after a while.

Today I found CC dead, in a dog house I put on the front porch for protection from the weather. I'm pretty sure the cause of death was a fight with another feral cat. His body was in pretty bad shape. Either he was trapped in the dog house and killed there, or he was severely injured and managed to crawl into the dog house to die.

It breaks my heart whenever something like this happens. And it really pisses me off because somewhere in recent history somebody decided to get a cat and not have it neutered or spayed, which led to a litter of kittens, then another, then another, which created this colony of unfortunate feral cats. I know that people can be incredibly irresponsible and, yes, stupid, and it no longer surprises me to see it. If those people could see what I see, maybe - just maybe - they'd do the responsible and humane thing and have their cats - and their dogs while we're at it - spayed or neutered.

Wouldn't you want to rid the world of a little bit of sadness and suffering if you could? You would if you'd have your pets spayed/neutered so they don't contribute to a growing population of feral cats. 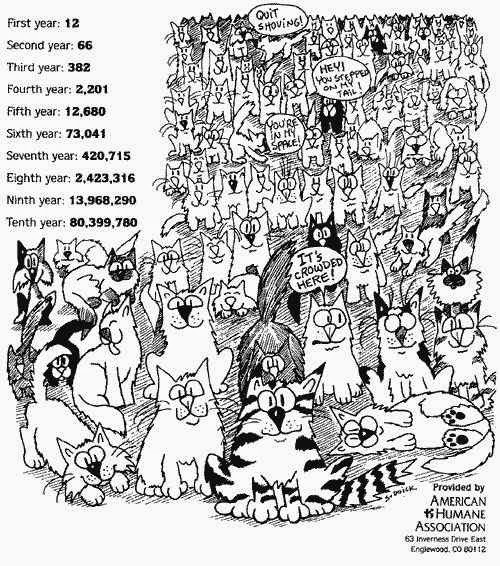 I was tempted to post a photo of CC dead, covered with flies, but it's a horrible sight. Maybe it might move someone to have their cat neutered/spayed, but it's really far too horrible, so I won't do that. Not even to make a point. Also in respect of CC, the wonderful cat that he was.