Imagine a happy, healthy woman who has no serious worries. This woman has a "normal," fulfilling life. She also has pets. She has a couple of cats who are her companions. She really loves these cats that have been with her for several years. Now imagine that one of her cats dies and, a few days later, another one disappears. Imagine how she will feel. She will be sad, of course. She might even go into a temporary state of depression, but she carries on. And she'll eventually come out of it.

Now imagine a woman who already has chronic depression. She has been depressed for several years. She takes anti-depressants that help her a little bit. She sleeps way more than she should and yet she still manages to get out of bed - eventually - so she can take care of her other pets. But, honestly, if there were no pets she would sleep a lot more. She has chronic fatigue along with her depression that makes it nearly impossible for her to do most normal things, like housework, bathing, shopping, going to medical appointments, etc. Now imagine that this woman loses not one, but two cats in the space of two weeks. One gets sick and dies. One just disappears. Imagine how this woman will feel. The mild state of depression felt by the otherwise-healthy woman will be added to the burden of this woman's chronic depression.

I haven't felt suicidal for quite some time, so that's not an issue. But damn it hurts. Ziva died a couple of weeks ago and now Himz has gone missing. Himz is a big cat - bigger than any other cat I've owned. I got him as sort of a trade for a dog. Long story. Forgive me for not going into it right now. Himz has been missing for four days. It's very unusual. 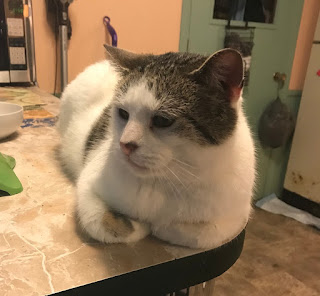 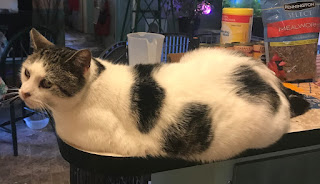 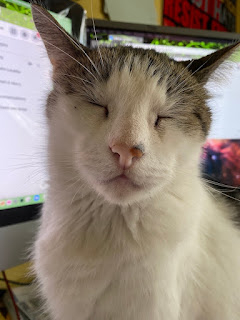 Before you go blaming me, let me explain that I have a cat door in my front window so cats can go in and out as they please. And I have a doggy door in my back door, and they can use that - and do - as well. Himz has used both doors and knows they're open all the time for him. I still feel guilty whenever a cat goes missing. I do believe in keeping cats indoors, but when you have several cats, a few dogs, and a job, that isn't easy to do. When I worked, I would rush home at lunch to let the dogs out. Eventually I got the doggie door so I wouldn't have to do that. But there was no way to keep the cats from using it, as well. And that's how my cats became indoor-outdoor cats. A few of them chose to stay indoors most of the time. Some of them went outdoors a lot, but came inside, too. Himz mostly stayed outside, but never ventured too far from the front of the house. He was extremely affectionate. When he came inside he liked to sit on my lap in front of the TV. A wonderful cat.

UPDATE: Himz came back yesterday. He seemed a little confused, which makes me wonder where he was. But he's home now and doing great!!! ❤️