For the past week I've been fostering a dog that I thought I might adopt. I can't adopt him, though, because he wants to kill my cats. Because of this, I've had to keep him tethered constantly - indoors and out. Well, indoors and mostly outdoors. When I take him into the backyard to pee, I let him off the leash, but only after making sure there are no cats out there that he can catch. There have been a few close calls, and my cats are extremely frightened and terribly unhappy. I, on the other hand, am extremely stressed. Charlie will go back to animal control soon, but I've been promised he won't be put down because he's been vaccinated and neutered. Charlie is a shar-pei, by the way. 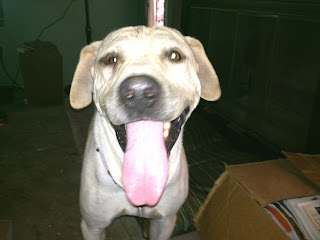 Charlie used to belong to my neighbors - the ones who live in the house behind mine. He was a backyard dog for a few years. He was neglected - put in the backyard to be a pet and left there, alone for most of those years. I never saw the family do anything with him - no playing or visiting. For awhile they even neglected to feed him. He was dangerously thin.  I had to call Animal Control to get them to feed him.

A few weeks ago Charlie and his companion, Rebel, a wire-haired terrier, got out of the backyard and were roaming around the neighborhood. Animal Control picked them up. The neighbors knew that Animal Control had the dogs but decided not to go get them. Charlie and Rebel were marked for euthanization. 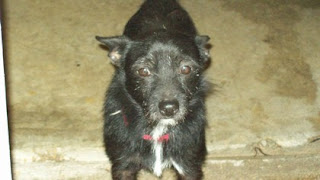 Someone rescued Rebel. She took Rebel in as a foster. But Charlie is a big dog and people don't often adopt big, older dogs. So I did. I knew Charlie was a great dog, but I also knew he might be a threat to my cats. So I asked Animal Control before I took him if it was okay to bring him back if it didn't work out. Jessica, who works at Animal Control, said yes. And after Charlie was vaccinated and neutered, she promised me he wouldn't be euthanized. I was right. Charlie wants to kill cats. As I said, there have been a few close calls, so I'm being very careful now. Charlie is with me in the house, and he's tethered to something so he can't get at the cats. The cats have learned that he's dangerous, but they also have learned that, when he's tethered, he can only go so far.

So here I sit, listening to Charlie bark at one of my cats, stressed out (me and the cat) and hoping someone will step up and offer to foster him. Someone will, eventually.
at 2:49 PM