Sore Hip and Sleeping A Lot

Been sleeping a lot, too. Today I decided I wasn't going to get up until I was ready to get up. That was about 7:00 p.m. Other days I have gotten up when I felt like going back to sleep. Every now and then I need one of these extra-long sleeping sessions. Otherwise I feel even more tired than normal (i.e. normal for me).

I've been procrastinating doing some things I need to do, like grocery shopping and mailing an important package. (It's merchandise that was defective. I'm sending it back to be replaced.) Fortunately, this is one of those times when my procrastinating hasn't left the dogs and cats with minimal food! They have plenty of food. In fact, so do I. But there are a few things I need in addition to mailing that package.

An old friend who I really would like too see was in town a couple of days ago, but I was sleeping and didn't get his phone call. When I had my Blackberry phone, I could turn off all sounds but the ringing of the phone. That was great because I would still get phone calls when sleeping, but I wouldn't be awakened by other sounds, like emails and such. But with my even-more-expensive iPhone, I can't do that. I have to turn off all sounds or no sounds. I have chosen to turn off all sounds rather than be awakened by unimportant things. And this is why I missed my friend when he called to say he'd be in town. So there's another down side to my chronic fatigue - missing phone calls I don't want to miss.

I have several wasp nests in the eves of my house just outside my back door. I don't want to bother them, and I probably won't, but they're right in a spot where I'd like to inject some expanding foam because of a gap in my house where the older part of the house meets the newer part of the house. I don't know. Which is more important: dozens of lives or my house gap? I think I'll put off filling the gap until the wasps have left for the winter. (They might be hornets. I can't tell the difference, and and don't think a lot of other people can, either. What do you think?) 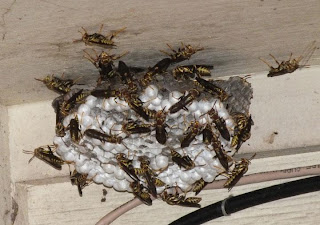 This is the largest nest, and the
one that's closest to the "gap."