I think I got bit by a spider. Sunday I was doing some yard work which included sticking my head in where unwanted plants were trying to grow. I didn't feel anything like a sting or bite, as I recall, but Monday I discovered what feels like a large mosquito bite on my neck. But mosquito bites don't usually get that big. Someone at work who looked at it for me (it's hard for me to actually see it) said it might be a spider bite, so that's what I'm going with. It had to be a smallish spider or the lump and sore spot would be significantly bigger. Here's what it looks like right now: 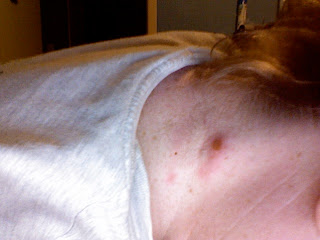 This is on the right side of my neck, almost directly below my ear. In this picture I'm bending down in front of my built-in webcam. (I have an iMac, which I love.)

Coincidentally, that same day (Sunday) I found a large spider on the underside of the top "shelf" of my cat tree (large cat scratching post, with ledges). It was bigger than a brown recluse, imho. I was thinking that maybe it was a male wolf spider. I've seen the females here before. In fact, I had a picture of one on my website before I lost it. (There's an earlier post about that.) I don't kill spiders. I catch and release.
at 8:20 PM