I have an old (cold) war injury that has been acting up lately. It started bothering me again several months ago. I've been to see the doctor and I had xrays taken. I haven't called the doctor, yet, to see what the xrays revealed. For the past several days the pain, which is usually bearable, has gotten worse. Today the pain was so bad that I broke down and bought a high-quality (i.e. expensive) wrist brace. I felt better almost immediately after putting it on. I was skeptical. I've never worn any sort of "brace" before, and I wasn't convinced that a brace could help. But it sure does! It keeps my wrist very straight, which keeps me nearly pain free.

I suppose I'll have to get used to people asking me "what happened?" I'll just tell them what I told you: It's an old cold war injury! After all, I was a soldier in the cold war, and I was a Russian linguist working at the National Security Agency (NSA) when this wrist problem began. So that makes it a cold war injury, right?!! 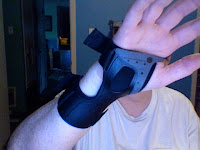