At work I've earned a reputation as a sort of rescuer of insects. I've carried a number of beetles, crickets, and spiders out of the store and set them free. Today my boss was working the front register when he noticed a spider down in the corner on the floor. He called me over. This spider was different than the usual spiders we have in the store - what I call the common garden spider. We get lots of those. They're easy to catch and carry outside. This one was not a common garden spider. When I reached down to grab it I realized at once that it was a female wolf spider. How did I know? Because bunches of tiny baby spiders that were on her back started to run! Maybe not hundreds, but dozens! I'd seen a wolf spider carrying babies before. She was larger than this one.

This mama wolf spider was hard to catch, and the more I tried, the more baby spiders went running. I was getting nowhere and, to my frustration and concern, baby spiders were everywhere. So I grabbed a bag and managed to scoop mama and what babies were left into the bag. The good thing was that they stayed put once they were in the bag, so I didn't have to worry about baby spiders crawling up my arm as I carried them outside.

I got the bag full of spiders to the grass and dumped them all out. Amazingly, they all came out quickly and easily. I was afraid I'd have to leave the bag outside, weighted down somehow, so that all the spiders could eventually make their way out.

Mama spider sat still once she was out of the bag and on the ground, lots of tiny babies still crawling all over her.

There were so many. I wonder how so many babies manage to reside on one mama spider body. I suppose her abdomen was much smaller than I realized - that the bulk of her body was actually babies.

Here's a picture of the wolf spider that was outside my house. this one was about three times as big as the one in the store. 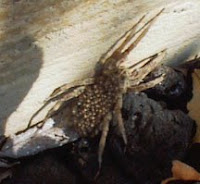