I'm tired, as usual, and I don't really feel like writing. But I promised, didn't I? So here goes. I'm going to write about the trip home (to Texas) from home (California).

Once again I was flying standby on United, thanks to my brother's having worked there for a lot of years. I was trying for a flight from San Francisco to Dallas. When I got to the airport the first thing that was obvious was that it was much busier than the Dallas/Ft. Worth airport. There was a long line to get through security, but it moved pretty smoothly. I got my ticked from the machine, as before, and got in line. When I finally got up to where a person looked at my ticket, I was asked to step over to a special area. Jackpot!! I was one of the lucky travelers who got to receive special attention. I guess I looked like a terrorist. Fit the profile. I guess the fact that I was traveling on an employee ticket didn't matter. Also, I'm an overweight 55 year old woman who bears no resemblance whatsoever to middle easterners, imho.

So I took off my shoes, put all my stuff in the plastic totes, walked through the metal detector, and was taken over to where they could take a closer look.

First I had to stand in this booth thing with my legs spread and my arms out while little nozzles blew puffs of air up my clothes. I have no idea what that was for, but I thought about it being that big x-ray machine that some folks have been complaining about - the one that shows much more of your body than any TSA employee needs to see. I don't think it was that thing, though, because I didn't see anything that resembled an x-ray machine.

Then some guy had to open and look through my carry-on bag and my purse. No surprises.

Then I got to put my shoes on, take my stuff and go to the gate.

I went through a few shops on my way thinking about buying a souvenir, but ended up with nothing. When I got to the gate I bought some water and a bad blueberry muffin. Then I waited for the flight.

This flight wasn't as enjoyable as the first. I was crowded into a cheap seat. Not nearly as much leg room as the first flight. If I recall correctly, we got a beverage and a snack, but I'm really not sure. We must have gotten at least a beverage. (I knew I'd forget a bit the longer I waited to blog about it.)

The flight was uneventful - which is definitely a good thing.

My niece and sister-in-law were waiting for me outside the terminal in Dallas. We drove to their house where I had left my car. I stayed for a short time but was anxious to get back to the dogs and cats, who by now were wondering if they'd ever see me again.

This picture was taken about a half hour after I got home. 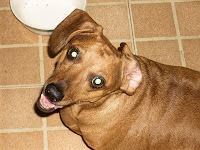