I've been up all night scanning old photographs. Most of them are of me at some point in my life. I decided to do this after my youngest brother died. I decided to get some photos ready for when it's my turn. Hopefully that won't be for quite some time, but you never know. Anyway, when they have my funeral or memorial service or whatever, I'll already have the photo displays ready! (Unless, God forbid, something happens in the next couple of weeks!)

So far I've got a whole bunch of pictures scanned and on my computer. I'll slowly make print copies of them (by uploading them to walgreens.com, of course). Then I'll buy a couple of huge poster frames and mount them attractively in the frames.

I've got to add some recent photos, though. I don't actually have any recent photos. I suppose I'll have to have people take pictures of me as my life continues so I'll have "recent photos" for the display.

I've also been trying to figure out my military assignments. I know where I was stationed and in what order, but dates fail me. I know I have all that information lying around somewhere. I just have to find it. I've signed up on a military website where I'm listing all that information, which is a good thing since it sort of forces me to get that information together. You can find the website here.

I can stay up all night because I'm taking some days off of work. I had a couple of vacation days and "special" days that I needed to take before November 1st, so I'm taking them now. Got to go back on Wednesday, though.

I'm also trying to get the house cleaned up a little while I'm off work. So far so good, but there's a lot to clean! 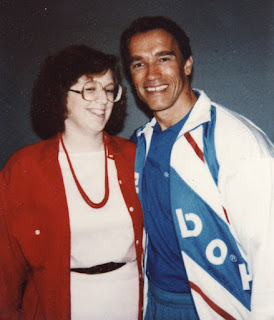 And here's one of my last reenlistment. It was at Ft. Meade, Maryland. I think it was in 1987. 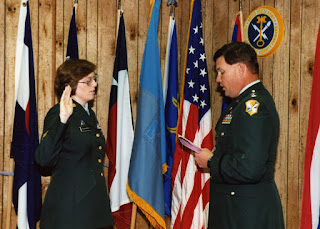 That's Lieutenant Colonel Charles Gross administering the oath of enlistment.
at 5:47 AM