My backyard has never been real grassy. Especially with the dogs going out there, and my lack of frequent mowing. Now, for example, the biggest part of the back yard is covered by wildflowers. (I blogged about this awhile back.) But I've been spreading some grass seed in the bare areas and it's growing very fast and very nicely. I don't know how rugged this new grass will be - if it will be able to stand up to the dog and cat traffic. I sure hope it can. 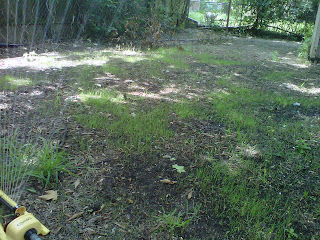 The secret, I think, is to keep it moist - the ground and the seeds. After I saw how well it was growing, I sprinkled more in the bare spots. Hopefully that will make this area look even better. Now I need to sprinkle a bit in the front yard. Maybe. I have a different type of grass in the front and think this may just look weird if I grow in in with the other grass. Maybe I should spread it everywhere, and not just in the bare areas.

I went grocery shopping yesterday. I spent about $250 and bought few groceries. So what did I buy? Pet food, of course. A betta fish to go in the aquarium formerly occupied by my crawfish (RIP). Other pet supplies. Cheap floor mats for my car. (I only need one but you can't buy just one.) Instead of the carpet kind, I got the rubber ones. I figure those will be easier to clean if I should spill another Mocha Java Chiller from Sonic. I got a small broom to sweep the concrete outside in the gazebo (cloth with mosquito netting). I got some things for the yard - bug stuff and more grass seed. Also some grass killer for my crabgrass and for a small area near the porch where I'm going to kill the grass and put down white rocks. It's an area about two feet by tree feet. I had a pretty bush there but it died. I think termites ate the roots, if they do that. So anyway, now I have to go get groceries again! Not a problem because I have procrastinated so long in renewing my driver's licence that it's now expired. Tomorrow I will go see about renewing it.

It rained a little this morning. I only know that because I slept poorly and woke up at 6:00 AM when Buddy threw up on the bed and my leg. I got up and ate some breakfast. Then at 9:00 AM I went back to bed and slept for a few hours.

I ate an apple a little while ago. I heard that "an apple will wake you up better than coffee," so I tried it. They (whoever they are) were wrong. At least in my case. Maybe it's the chronic fatigue. I really need to remember to call the doctor about it. I have been meaning to but keep forgetting. I know the VA has a sleep clinic. I suspect I'll end up there eventually.

Last night I watched The Green Hornet. I hadn't seen it and it was on one of the movie channels I pay for, so I recorded it. (I wrote that I "taped" it and then changed it to "recorded." That's a habit I'm trying to break, since we don't actually "tape" things anymore!) So I'm about 45 minutes into the movie, and I'm wondering, when does he get the ring and the shiny green suit? Doh! Eventually I realize -- that doesn't happen to the Green Horne. That's the Green Lantern! Okay. Oh well. Glad no one was around to witness that!