I got an e-mail from a "secret admirer" which led me to a blog post. Here is the blog post (with URL removed): 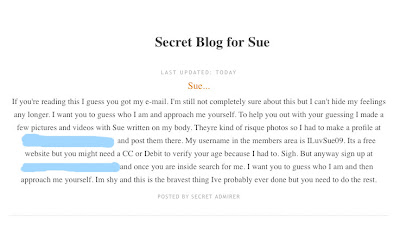 I've never seen spam like this before. It's a real blog post at blogger.com. (I reported it for spam.) You must admit it's clever and intriguing. But as soon as they mention the "CC or Debit" you know it's spam.

The fact they want a CC number is a red flag. But you know that. It is quite clever though.

Do you have the WOT plug-in installed?

Yeah, I mentioned the CC number. Didn't you read the whole thing?!

The what? The WOT?