What I Did Yesterday, and more.

I was stinking tired yesterday when I posted, and planned to go straight to bed. Then I remembered that the season finale of one of my two favorite shows was going to air. So I stayed up to watch the season finale of Dexter. What an incredible show, and what an INCREDIBLE finale! O! M! F! Goodness!!!! I'd been a bit disappointed that Dexter seemed to be getting a little sloppy this season. I now forgive the writers for that transgression. If you're not watching Dexter, go out and rent the DVDs from the first season and watch. I doubt that you'll be disappointed. (My other favorite show is Lost, but did I really have to tell you that? See the timer to the right of this post.)

It was supposed to be 70 degrees (F) yesterday but I don't think we quite got there. But today more than made up for it. Eighty degrees and no humidity. It would be the perfect summer weather, but it's not summer, and this is central Texas. No chance of a summer here without humidity.

Speaking of yesterday, I had a very different day yesterday. A friend of mine (who shall remain nameless for her privacy) is married to a Texas prison inmate. He recently attempted suicide (no details, again, for the sake of privacy). He was transferred to a prison medical facility, and she asked me to drive up with her so she could visit him. I agreed, even though it would mean getting up at 4:00 a.m. and driving for hours.

If you know me at all you know that I have a very hard time getting out of bed for any reason. I'm just tired. Tired all the time. I have referred to it as Chronic Fatigue, and I'm working to find out what's causing it (although the only blood test I've had so far has revealed nothing). So promising to get up at oh-dark-thirty (as we used to say in the Army), was a huge promise. I kept that promise. 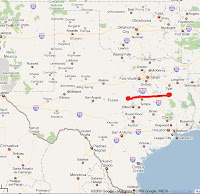 My friend's husband started out at a local prison, which is why she lives here, near me. Unfortunately, as often happens, he was transferred to a facility far, far away. Our trip to the medical facility was just about 170 miles (according to google maps).

My friend was worried about me the whole time - that I was hungry and that I was tired! Sweet woman, but I kept telling her that I'd let her know if I was tired and when I got hungry. We'd agreed to stop for breakfast along the way. I still wasn't actually hungry when we finally stopped in Mexia (meh-HAY-ya). We had a great breakfast at this very texan-decorated restaurant called "Drillin' Rig." I had a vegetable and cheese omelet with hash browns, toast, coffee and orange juice. It was yummy. I recommend this restaurant to anyone who might find themselves hungry in Mexia. It's on Highway 84. If you really care, you can google it. It's there.

We continued on our way to Rusk, to the medical facility, and arrived there at about 11:00 a.m. Considering how foggy it was all morning, it's a surprise that we made it in five hours, since we had to drive slower than normal most of the time.

As my friend visited her husband, I spent my two hours at the nearby hospitality house. This place was wonderful. It was extremely clean and well-furnished. There were drinks and snacks, and a playroom for children. The host, while I was there, was very friendly (and very talkative, so I didn't get to read, as I'd planned). I'm embarrassed to say that I don't remember my host's name, or I'd tell you.

After I arrived at the hospitality house a man came in with a child. They both went back to the playroom and my host and I could clearly hear the child playing with the toys and the man sawing logs!! Then a couple came in with a dog and their elderly mom, who both waited for the couple to finish their visit. The dog was a cute little black, jack russell-chihuahua mix. I got to take her outside once so she could pee.

Before I left I got to listen to some other folks talk about Wal-Mart and then about President Obama. I pulled out my Kindle and tried to read a bit, but it wasn't easy with those folks talking nearby. I have learned that, when in Texas I do not participate in conversations about President Obama. I would if I were a better debator, but I'm not. I don't recall details, I recall concepts and feelings. It's difficult to debate with concepts and feelings as your tools.

My friend came back to pick me up after her two-hour visit with her husband, and again, we were off on our return road trip home.

This time the drive was much more pleasant because the fog had finally lifted and the sun was out. We had seen many "historical markers" along the route, so we finally decided to stop and look at one so my friend, who has only been in this country for about ten years, could see what they were. The one we stopped to see wasn't real exciting. Something about one railroad meeting up with another railroad. (No, not that big one where the eastern and western lines met up.) So she got to see her first historical marker and find out what that was all about. I suggested she look up Texas historical markers on google and learn more, if she was curious.

On the way up we'd seen some buffalo and decided to stop on the way back and take some pictures, but they weren't there when we drove back by. They had moved to another part of their grazing pasture. We wondered about the difference between buffalo and bison. I said I thought they were the same thing, and looking it up now I find that I was right.

We stopped in Mexia again on the way back but not to eat. My friend put gas in her car. We did go into a Wal-Mart to use the bathroom and my friend bought some chicken. I was going to buy some popcorn chicken, but they didn't have any. They had popcorn shrimp, but that didn't appeal to me. I wasn't actually hungry, so I didn't buy anything.

The rest of the trip was uneventful except for a stop at a convenience store. I'm still not sure why we stopped there. My friend said she usually stopped for coffee, I think. We didn't get any coffee. I sinned and bought five scratch off lottery tickets, which I keep forgetting about, so they're still in my bag unscratched. (I could be rich!)

My friend dropped me off at home at 5:00 p.m., which totals an eleven-hour excursion, if you don't want to do the math yourself.

Even though it was an effortless day, I was still real tired when I got home, as you know, but I stayed up to watch Dexter. When I did finally lie down to go to sleep I was out like a light, and slept for several hours before I had to get up to pee. (TMI, sorry.) Normally I don't sleep more than two hours at a stretch. Three on a good night.

I leave my computer on all the time to process seti@home data. I turn the sound off so I can sleep. (The computer is in the old half of the bedroom, which is now my office.) I have it set to come back on after a power outage, and we had a power outage last night, for some reason. I woke up when I heard the bongish sound of my Mac rebooting. I also heard the noise announcing I had mail, both Eudora mail and Google mail. And since I didn't get up to turn the sound back off, I heard the Eudora mail sound whenever my computer found new mail (checked at 15-minute increments) and the Google mail sound a couple of times. Eventually I got up and turned the sound off so I could sleep soundly. Or soundlessly!

A First. I have a reason to be unhappy with my President. I have been retired from the Army for 15 years. This is the first year that I, and other military retirees, have not received a cost of living raise. And my tax deduction has increased. I don't know much about why this happened, but I know I'm unhappy about it. Forgive me if I sound like so many other groups of people when I say, go ahead and make cutbacks, but not with my retirement pay. This really sucks and I'm going to find out how it happened.
.
at 8:13 PM

Your longest post ever. And a good story of a sort. An adventure is always good and makes a good tale and what you had was an adventure.